PLAINVILLE – Dessin Fournir Cos., one of America’s leading luxury furniture, lighting and textile design firms, this week announced that OJ Van Maele of Tielt, Belgium, has been acquired by the newly formed Garnell-Lake investment group, which was created by Dessin Fournir Companies’ Co-Founder & CEO Chuck Comeau and a group of design industry leaders from around the country.

OJ Van Maele is one of Belgium’s oldest and most respected linen mills and a favored resource of designers, both domestic and international. Founded in 1906 and run today by CEO Carl Holcomb, who will stay on at the helm of the firm, the company is a producer of luxury textiles and wall-coverings, which are exported globally. While their exquisite linen makes up most of their production, the company also works with other natural or exotic fibers as raffia, horsehair, abaca and more.

Like many in the industry, Comeau has been a fan of OJ Van Maele for many years and recently learned of the company’s distress, which was traceable to the financial issues of the last decade. Determined to help the company, he reached out to a number of design world luminaries, all of whom felt as strongly as he about helping to preserve what could quickly become a lost art form. From there, the Garnell-Lake investment group was quickly formed to raise the necessary funds. Besides Comeau, the group includes Randy Powers/J. Randall Powers Design; Shea Soucie/Soucie Horner; Suzanne Tucker/Tucker & Marks; Tim Marks/Tucker & Marks; Suzanne Kasler/Suzanne Kasler Design; Winton Noah/Ainsworth Noah; Hal Ainsworth/Ainsworth Noah;Kerry Joyce/Kerry Joyce and Associates; Doug Kinzley/Kneedler Fauchere; and George Massar/Kneedler Fauchere. 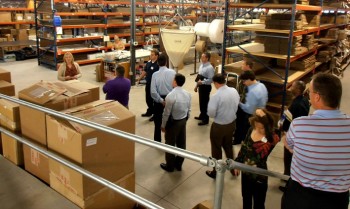 Preserving an artistry that is devoted to old world craftsmanship is a personal goal of Comeau’s, as well as all of his partners in this venture. The entrepreneur’s vision has always been at the core of Dessin Fournir’s philosophy – “we have chosen to preserve an Old World legacy of craftsmanship elsewhere forgotten,” said Comeau. “We are passionate about preserving the traditions of hand craftsmanship and the use of only the finest materials and master craftsman skills. With the help of a handful of industry VIPs, we are now able to preserve the old world craftsmanship of Van Maele and the world will continue to experience some of the most finest textiles known to mankind,” added Comeau.

The acquisition will allow the renowned Belgian linen mill to continue to build on its 109 year-old legacy of luxury weaving, superior design and craftsmanship. Going forward, it will operate under the new name of “Van Maele Weavers” and will be run as a separate entity, reporting directly to the investor group.