Paradise Township was settled between the years of 1868 to 1878. During that time, the town of Motor, the first town to be established in Paradise Township, came into being. It was one mile east of what is now Codell, and was located on all four corners of what ins now 25 Road and 18 Highway. The name “Motor” meant “a moving force.” Instead of it moving things forcefully, it was destined to be moved to a new location, and it’s name changed to Codell. 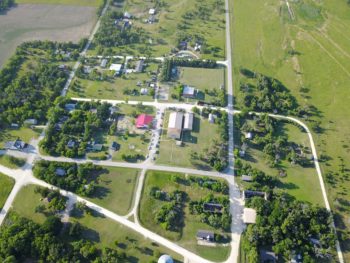 In 1887 and 1888, the Union Pacific Railroad ran a branch line from Salina to Oakley. The survey ran just south of Motor, and because of the failure of the railroad to agree on a price for the townsite, the railroad refused to build a depot near the town, but built one three-fourths of a mile west. It bought land for a townsite and named it Codell. The name “Codell” means “a retired glen.” The frame buildings were moved from Motor to Codell.

The Codell School District No. 11, was organized in 1879 at Motor in a sod building with hand-sawed logs for benches. In 1894, a two-story building was built in Codell, but was destroyed by a tornado in 1918. A new brick building was erected in 1920, which served as both grade school and high school for 20 years,. In 1938 to 1940, a new high school was built as a W.P.A. project. Because of school unification and lack of students, the high school closed in 1965. The grade school closed in 1978.

During the early settlement, the Church appeared on the scene along with the school. The Methodist and Baptist denominations were first, each using the same building, alternating services, which were held in the school building. In 1908, both congregations made new edifices. The Baptist Church was built on the present location, and the Methodist Church was built in the northeast part of Codell. The town also had many businesses that do not exist today such as a bank, hotel, restaurant, and hardware store.

The 1918 tornado was a hard blow to the town, the effects of which it has never fully recovered. In spite of that and other deterrent influences, Codell remains a peaceful, friendly little village. (photo courtesy of Scott Smetana)

On May 20, 2018, the town of Codell celebrated the dedication of a new sculpture to commemorate the 100th Anniversary of the 1918 tornado.  Well over 100 people attended the event, including KWCH Meteorologist Merrill Teller, who helped commemorate the historic event.  Here are some pictures of the event and of the new sculpture:

Click on any of the links below for more interesting information about Codell: