On May 20, 2018, the town of Codell celebrated the dedication of a new sculpture to commemorate the 100th Anniversary of the 1918 tornado.  Well over 100 people attended the event, including KWCH Meteorologist Merrill Teller, who helped commemorate the historic event. 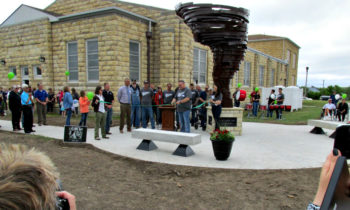 The 1918 tornado was a hard blow to the town, the effects of which it has never fully recovered. In spite of that and other deterrent influences, Codell remains a peaceful, friendly little village.