The votes are in!  The 8 Wonders of Rooks County have been selected, so let the debate begin.  By a vote of the people, the following attractions in Rooks County were selected as

Both St. Joseph’s Church and the Rooks County Courthouse are listed on the National Register of Historic Places.

The “8” wonders was selected in keeping with the 8 Rural Cultural Elements as defined by the KSF–Architecture, Art, Commerce, Cuisine, Customs, Geography, History, and People.  Using the 8 Elements as a guide, Explorers can see their community with new eyes and spur  a new interest and energy within the town.

Other than the 8 that were selected by the vote, other sites were semi-finalist: The Twin Mounds near Plainville; Damar store fronts;  Rooks County Museum in Stockton; Sugar Loaf mound in northern Rooks County; and Plainville Township Lake.

Here is a little low-down on each of the 8 Wonders of Rooks County: 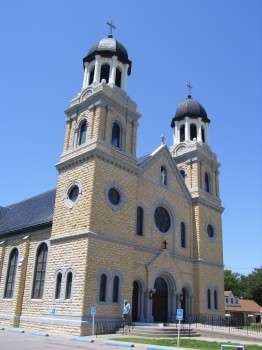 Nominated as one of the 8 Wonders of Kansas Architecture, St. Joseph’s Church in Damar is a well-known landmark in Rooks County.  Beautifully Romanesque in design, the church stands high on the Kansas plains as a sentinel guarding its flock.  Through the years, everyone who has toiled in town or in the fields did so in the sight of its crosses held high so all could see.   The impressive site has drawn countless pilgrims from the speeding highway to admire its beauty.

In 1912, the congregation of the Damar parish had outgrown the existing church and plans were put in place for a new church.    Due to hard times, the building was completed in stages. Though the towers were completed by December of 1913, the church was not plastered until 1917 in preparation for the first Mass to be celebrated.   The limestone for the church was quarried at Waldo, Kansas and shipped to the site.

In 2005, the church was placed on the National Register of Historic Places.  In the succeeding years grants and donations allowed the church to undergo significant interior renovations amounting to over $277,000. 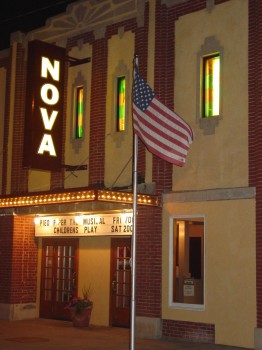 After sitting vacant since 1974, the Nova Theater in Stockton was brought back to life beginning in 1997 by an energetic group of local residents determined to restore the building to its former glory.  The theater officially reopened in late 2001, and has now seen over 40,000 people pass through the front doors to view movies, plays, and concerts.

The Nova Theater first opened its doors in 1932, and provided the residents of Stockton and Rooks County a place to view glamorous stars, thrilling chases, and good guys winning out in the end.   All on the big screen!   Today the theater has provided Rooks County not only with a movie theater, but also with a first class meeting facility that has been used for meetings of state officials, personal tributes, and other special events.

The Nova is operated entirely by volunteers.   Since the initial reopening, volunteer managers, ticket takers, concession workers and projectionists have donated thousands of hours to theater operations.

A tornado in 2005 threatened the continued existence of the theatre, destroying part of the building, and much of the air conditioning and heating units.  Fortunately, structural engineers determined the building could be saved and repairs were made.  The triumphant reopening came in mid-October 2005.

Officially listed on the National Register of Historic Places near the end of 2000, the Rooks County Courthouse is a stately Neo-Classical Revival structure that dominates its surroundings.  Construction of the Bedford stone courthouse began in 1921 and was completed in 1923.

The cornerstone was laid in a grand ceremony on September 8, 1921.  In the cornerstone was placed a copy of each of Stockton’s papers-the Review and the Record-, several old coins, a copy of the by-laws of Newahcuba Lodge #189, a list of the Grand Officers who had charge of the ceremonies, a list of members of local lodges, a statement of the cost description, the date of letting of the contract, and the pen used to sign the contract.

In 1974, an elevator and fire escape were added to the south side of the building using identical materials to the original.  In 1994, a veteran’s memorial was dedicated outside of the northeast corner of the courthouse. 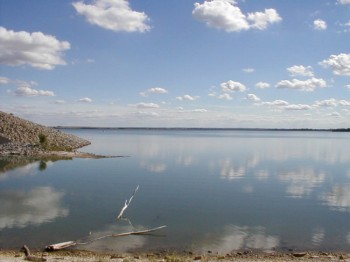 With over 70 utility campsites and over 100 primitive sites, campers can find the perfect setting for their overnight visits to the park.  Playgrounds, volleyball court, horseshoe pits, swimming beach, and a nature trail add to the opportunity for diverse recreational pursuits.  A cabin was added to the north side of the lake in recent years that allows for weekday and weekend rentals.

Construction of Webster Dam began in November 1952 in response to the need to stabilize agriculture by storing destructive flood waters for irrigation.  The rolled earthfill dam rises 107 feet above the streambed and about 154 feet above the lowest foundation point.  About 8,145,000 cubic yards of earth embankment and rock facing and over 45,000 cubic yards of concrete were used in construction of the dam, spillway, and outlet works.

Despite recent drought conditions that have lowered the lake level considerably, the lake is still a popular recreational attraction for much of northwest Kansas. 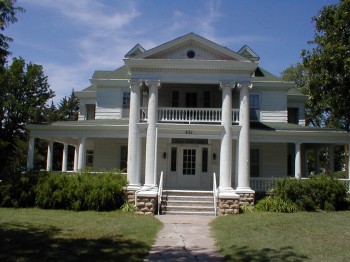 The Waller Coolbaugh House in Stockton offers visitors a High Classical Revival residence that, at the time it was built, was considered to be one of the finest homes in northern Kansas.   The home was built in 1904 by local businessman M. J. Coolbaugh, who organized the State Bank of Stockton.

J. A.  Plowman of Jewell County was the contractor and carpenter on the home and saw to the completion in the spring of 1905 for an approximate cost of $9000.  It was noted in local publications of the time, the home “has a noble exterior, graceful in design, unhampered in its effect by the usual gingerbread display.”  The architect of the building was Frederic J. Klein of Peoria, Illinois, whom Mr. Coolbaugh consulted in person at his office in Peoria, and after giving his views as to the kind of house he wanted, the plans were elaborated by the architect and the result was the design which was given to Mr. Plowman for completion.

The interior of the home features solid oak trim throughout, beginning with the front entrance made of richly carved massive oak doors at each side of the vestibule.  A handsome staircase leads to the floor above.  Also featured in the home are several ornate fireplaces, antique radiators, and unusual nooks.

The home is now owned by the Waller family of Stockton.  Tours are available weekends in June, July, and August.  For information, or to arrange a tour, call Eris Waller at 785-425-7227.

The Rooks County Fair has been a fixture of Rooks County entertainment since 1879.  Popularly known as “The Fair of Champions,” the fair has continued to be one of the largest county fairs in the state of Kansas.  The fair was permanently named The Rooks County Free Fair in 1951.

The current fairgrounds in Stockton are dotted with historic buildings built of native limestone dating back to the 1930’s WPA era.  By far the largest structure on the grounds is the grandstand built in 1937.  The grandstand when originally constructed was large enough to accommodate over 3,500 people.  The retaining wall built around the west end of the track, the horse barns, and other exhibition halls on the fairgrounds are also of native limestone and built during the same time period.

Through the years, the fair has hosted many dignitaries such as former presidential candidate Alf Landon, and Governor Frank Carlson, as well as famous entertainers such as Martina McBride, Conway Twitty, Chris LeDoux, and Taylor Swift.

Started as a means of exhibiting livestock and crops, the fair has continued through the years to be a culmination of the efforts of kids and adults alike to exhibit their wares.

In 2004, the fair celebrated their 125th anniversary with many special events.

Sometimes called the “Stone Church” because of its thick, limestone walls, the Ash Rock Church stands as a memorial to the spirit and hard work of those who settled the land, survived its hard times, and enjoyed its good times.

The church was completed in 1882, making it one of the oldest existing structures in Rooks County.  It is constructed of Fort Hays Limestone, a stone that is softer and easier to quarry than Post Rock Limestone, more commonly used at the time for building.  The walls are approximately 18 inches thick and comprised of two separate walls.  The space between the outer wall and inner wall is filled with chipped stone debris.

No records remain which would provide any clue to the cost of constructing Stone Church.  It is also unknown exactly when the first service was held, but local historian Leo Oliva’s research would indicate that it was most likely a Sunday service on March 4, 1883.

The church was renovated in 1976 to its present condition.