Designer Chuck Comeau set up his high-style business in an offbeat location: A windswept Kansas plain 240 miles away from a major airport.

High style on the prairie

PLAINVILLE, Kan. (Fortune Small Business) — From a distance Plainville looks as if it hasn’t changed in decades. Grasslands dotted with oil derricks and windmills stretch for miles around the tiny downtown. Local businesses, from the Farm Implement and Supply Co. to Leon’s Drilling Service, reflect the pragmatic needs of the 1,800 or so residents of this outpost three hours northwest of Wichita.

But there’s more to this speck of a town than meets the eye. Amid the wheat fields and cattle farms, Chuck Comeau is growing a cutting-edge company that designs and manufactures luxury home furnishings. That company —Dessin Fournir — has built a roster of elite clients including Oprah Winfrey, Elton John and Janet Jackson. In addition to its Plainville headquarters, Dessin Fournir has expanded to include showrooms in 15 cities throughout the U.S., along with two in Canada and one in Russia.

So what’s a company with global reach doing in a remote corner of the Great Plains? Big business, for one. Comeau, 52, won’t disclose revenues (except to say they fall somewhere in the low eight figures), but he boasts that Dessin Fournir has seen 11% average annual revenue growth for the past 15 years. One of the factors making that possible, he explains, is the Plainville community and, in particular, his 90 employees, all locals.

“They take pride in the company and are as devoted as I am to making it a success,” Comeau says.

From the beginning he’s made every effort to hire carefully and limit turnover. “In the furniture business it’s important to be consistent,” he adds. “In terms of quality, in terms of customer service, it’s impossible if you are constantly retraining people.”

Although Comeau grew up in Plainville, the town wasn’t his first business location pick. When Comeau and his business partner, Len Larson, pooled $250,000 of their savings to launch Dessin Fournir in 1993, they were based in Los Angeles. At the time L.A.’s popularity among top decorators and other tastemakers made it seem like a natural place to produce high-end furniture.

But things didn’t go according to plan. Comeau’s overhead costs were through the roof. He struggled with frequent turnover among his early hires. Dissatisfied, he began thinking back to his hometown, where he’d once worked as a petroleum engineer and a ranch manager.

Dessin Fournir had been in business for less than a year when Comeau decided to shut down the company’s L.A. headquarters and whisk it 1,400 miles east to windswept Plainville. There he learned an unexpected lesson: Although the town’s residents were unlikely to shop for $3,000 dining chairs or $1,500 lamps, they were very good at making them. (Dessin Fournir still manufactures some items in Southern California; thanks to the region’s mild winters, craftsmen can dry the finishes on their furniture outdoors year-round.)

Compared with America’s business capitals, Plainville has its drawbacks. The closest international airport is more than 240 miles away in Kansas City, Mo. There aren’t any movie theaters or fancy places to eat. But Comeau says that working with the people of Plainville — and raising a family there — made the move worthwhile.

To that end, he tries to put his employees first. No secretary guards the door to his office; staffers are welcome to bring their ideas, questions and concerns directly to Comeau, the CEO. He says he tells potential employees that gossiping and backstabbing won’t be tolerated and that anyone who can’t get along with the team will be asked to leave.

As a result, new hires tend to stick around. Troy Hixon, 45, the company’s chief operations officer, joined Dessin Fournir 10 years ago and says the “family atmosphere” is a big reason he and others have stayed for so many years. “Everyone is listened to, and their input is valued,” Hixon says.

Mitchell Gold, founder of Mitchell Gold + Bob Williams, a furniture brand that boasts more than $100 million in annual sales, notes that many designers fail because they are inconsistent.

“Comeau’s furniture is a couture product,” Gold explains. “It requires constant inspection to maintain quality. And when you are doing so much custom work, it’s very difficult to maintain high standards and cost-effectiveness.” So building a team — and keeping it — is essential.

Comeau’s results speak for themselves. Kerry Joyce, an L.A.-based, Emmy award-winning set designer, says that high-end designers and decorators have long considered Dessin Fournir’s furnishings to be among the best made in the U.S.

“It’s known for expert craftsmanship,” Joyce says. “Only a few companies can create finishes like Dessin Fournir.” Comeau, the company’s sole designer, built Dessin Fournir’s reputation on elegant, classic furnishings handcrafted to exacting standards. The company has since developed new furniture lines that are more modern-looking but are given the same attention to construction and detail.

It is impossible to miss Dessin Fournir’s headquarters. 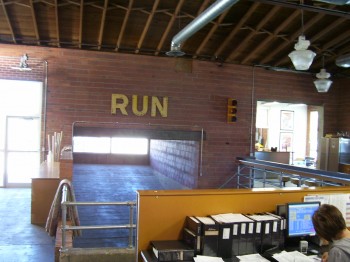 Occupying the site of a former auto-parts shop in Plainville, the exposed beams and bare brick walls reflect Comeau’s core design principle: elegance through simplicity. To house his expanding company, Comeau has renovated eight buildings in three blocks downtown, all with the same minimalist feel — crisp, contemporary structures that stand out from the neighboring storefronts.

Though Comeau credits Plainville for much of his company’s success, some locals think they should be thanking him. In a region where communities are losing jobs and residents faster than they can attract them, he is now the town’s largest employer. The population of most Great Plains counties declined between 1950 and 2007, according to the U.S. Census Bureau. Nearly a fifth of those counties lost more than half of their residents. And the recession, of course, hasn’t helped. But even as downtowns go dark across western Kansas, Plainville’s population is holding steady, and a number of new homes have been built in the past two years.

These days Comeau devotes equal time to managing his business and helping to revive the local community, including the nearby town of Hays, where he graduated from Fort Hays State University in 1978. A series of economic hits spanning several decades decimated Hays’s once lively shopping district. Just a few years ago most of the storefronts there were empty.

“I have great memories of the old downtown,” Comeau says, recalling how pedestrians strolled along streets lined with shops and restaurants. “It would be great to see that again.”

During the past 10 years Comeau has spent millions of dollars buying empty commercial buildings in Hays, 14 in all. He has pared most of them down to the bare bones, revealing brick walls and tin ceilings that give the spaces an airy, loftlike feel. Eight of the once-empty storefronts are now renovated and house new retail tenants, such as a spa and a children’s clothing store, along with a general store that Comeau owns. Work to restore six other properties, including the theater where he worked as a teenager, is under way.

In his role as a landlord, Comeau is far from realizing the financial success he’s found in the furniture business. But for him that’s not the point. He believes that, given the right conditions, entrepreneurship can help revive towns like Hays and Plainville. “This is going to be the thing that revitalizes our economy,” he says.

Tammy McClellan owns a jewelry boutique in Hays called Simply Charmed. She was the first tenant to set up shop in one of Comeau’s refurbished buildings.

“This place is gorgeous,” she crows, showing off the exposed beams and brick walls. “People like coming in here because the atmosphere is so nice.” McClellan’s sales have doubled since she opened the store in 2003, and she credits much of that increase to the pleasant surroundings.

The new shops have attracted something downtown Hays hadn’t seen in years: pedestrians. During the day, locals and visitors from neighboring towns stroll from one storefront to the next. At night a brewpub, Lb. Brewing Co., co-owned by Comeau and several local investors, keeps things hopping.

A town on his shoulders

Even with a great staff and solid business practices, Dessin Fournir is not recession-proof. “We had our first down month in October 2008,” says Comeau. “We were up slightly at the end of the year, but then January was just horrific.”

And with the weight of his hometown’s future on his shoulders, the pressure involves more than business. So Comeau is tightening his belt. He stopped buying advertising for Dessin Fournir. The company’s top executives have all taken pay cuts of at least 35%; everyone else took a 10% cut. Even so, the company has had to lay off sales personnel who were hired toward the end of 2008.

Though he hopes better economic times lie just ahead, Comeau says he isn’t going to wait around with his fingers crossed. Standing in a corner of his warehouse, he sorts through a jumble of objects, including antique globes, Chinese pottery, old footstools and quirky vintage lamps, all amassed over decades of shopping at thrift stores and auctions. These pieces are the inspiration for his next line of furniture, Jamison, which will be available in 2010. Comeau is optimistic that the new collection, more whimsical than the rest of his work, will expand his customer base by appealing to buyers with a different sensibility.

In tough times, he says, “we will continue to innovate.”